DESIS in the Mirror is a project by DESIS Network and IMAGIS research group (Design Dep. – Politecnico di Milano) created to reflect on the practices of audiovisual production within the network DESIS. The members of DESIS Labs are almost entirely designers involved in projects related to social innovation and sustainability. Despite not being filmmakers, almost all of DESIS members use audiovisual language to communicate their projects and to promote a social dialogue.

The research has tried reasoning with some of the members of DESIS Lab about their experiences of video production, virtually putting them in dialogue with those of the filmmakers and artists who, despite different backgrounds and perspectives, were sharing in some extent a close sensitivity in the way of viewing and representing realities. Since July 2013 we recorded 13 on-line video-interviews all around the world about the production of moving images in the realm of social innovation (4 artists and filmmakers; 9 DESIS members) in order to:

– explore the practices of video production at the interior of the DESIS community;
– identify the communication needs of DESIS Network, their thoughts, limitations and possibilities of their current audio-visual practices;
– look at the experiences of professionals to get advice and to find out the potentiality of the audio-visual language.

The research first aim was allowing a dialogue inside the DESIS community about the video productions, following a self-reflective activity. The interviews were led in a dialogical and semi-structured way, almost all the time from three different locations all over the world. Each interview, conducted via Skype, lasted an average of two hours. In the end, the approximately 26 hours of recordings were transcribed and then analyzed.

The short videos are intended for the scientific community, offering opportunities also for interdisciplinary dialogue around the topic of investigation. So far they have been used on the occasion of international conferences, presentations and panel discussions contributing to clarify problematic issues and facilitating dialogue among peers.

We imagined that a possible way to organize the narrative for the audiovisual format was to design two different kind of short videos: one by author, and the other one by topic. The videos arranged by topic try to create a cross-path of the different ideas of the interviewees about the same theme; the videos by author, instead, highlight some of the main ideas emerged during the single interview, giving space to show something about the specific video and art productions of the interviewee.

These two different narrations were realized by a process of scriptwriting where the words of the interviewees were highlighted from the transcripts and then translated into the video editing, trying to produce videos of four minutes length maximum. 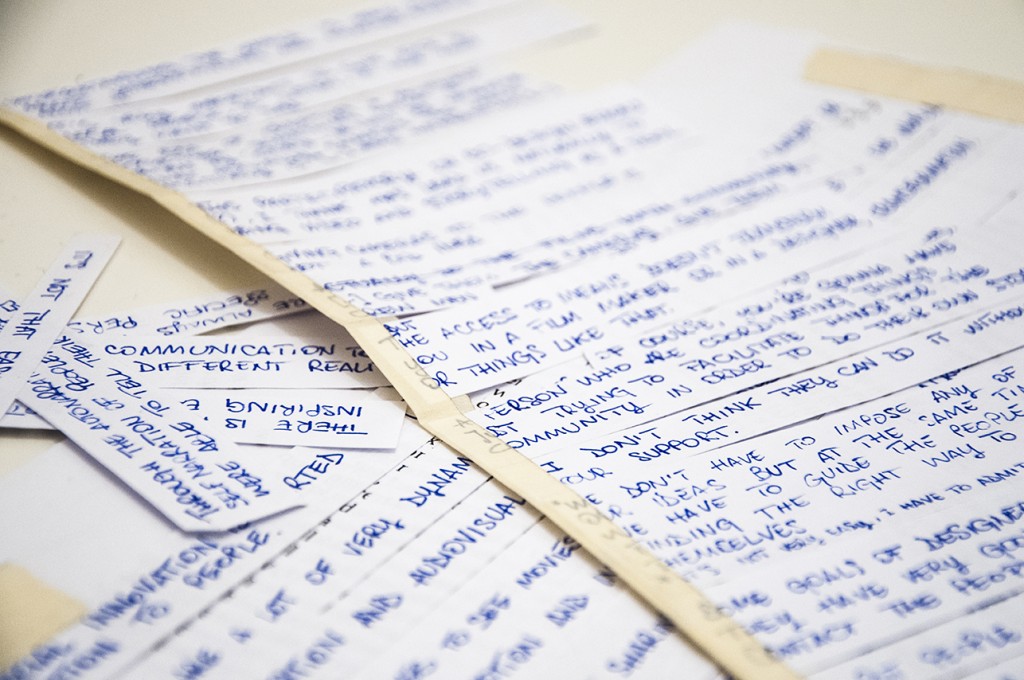 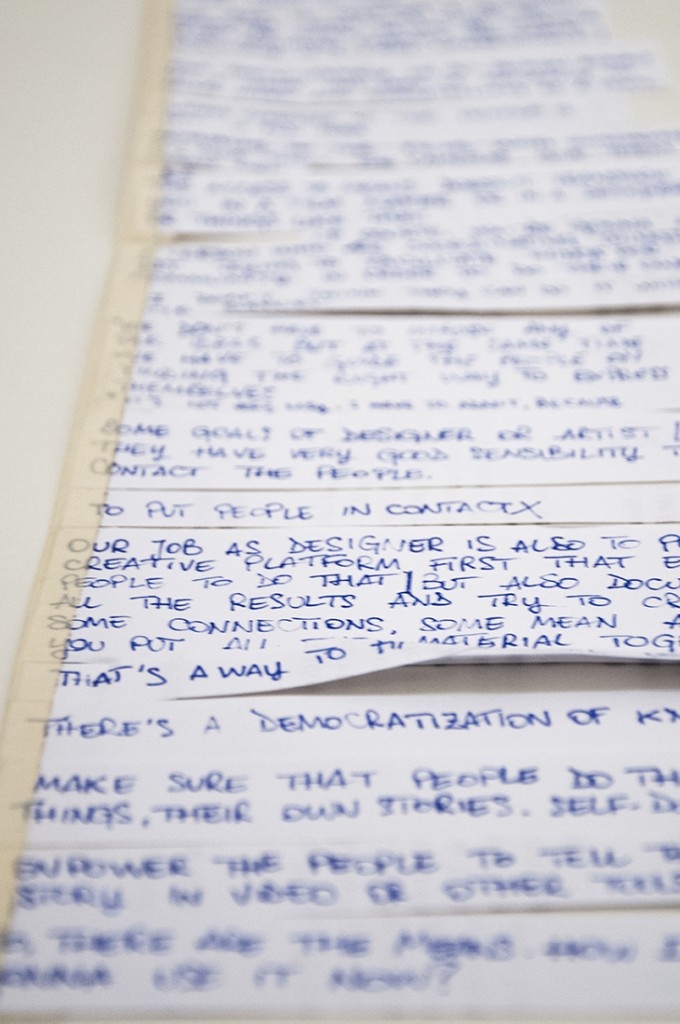 Designing the audiovisual format meant also to deal with the bad quality of the recordings. By leading video interviews via internet it was possible to link distant countries and making them virtually close; at the same time the video interviews had many technical difficulties, and the recorded materials kept the memory of that, with frozen frames, low quality images and noisy audio.

Making the quality of the clips higher was impossible, and not using them meant omitting part of the narration. If we couldn’t make the material better, then, one of the remaining choices was to play with the rough.

Inspired by glitch art approach, the noise in the recordings was graphically re-elaborated into different colorful shapes, frantically moving on the screen, superimposing on the images, and hiding their bad quality by intensifying it.
Through the “fake” noise, the technological limits were highlighted and became another side of the story, telling the viewer about the distance and the difficulties of the research process. By designing the format we tried to make the medium “opaque”, making its presence visible, in order to enhance the research process itself. In other words, enhancing the communication system that made it possible. 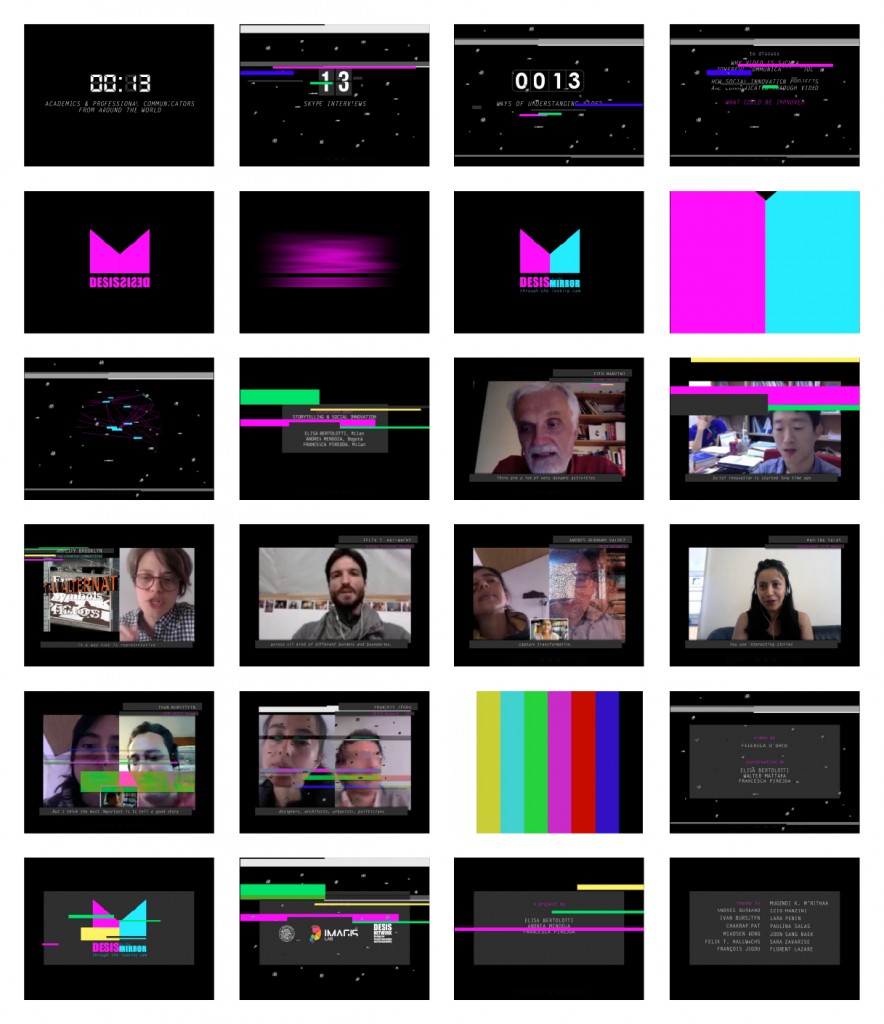 The result is an aesthetic code which defines the format and provides another story: frozen frames, audio interferences, noises want to tell their points of view, their story about the physical distance, about the technological limits, about the digital tools’ need to express their own materiality.